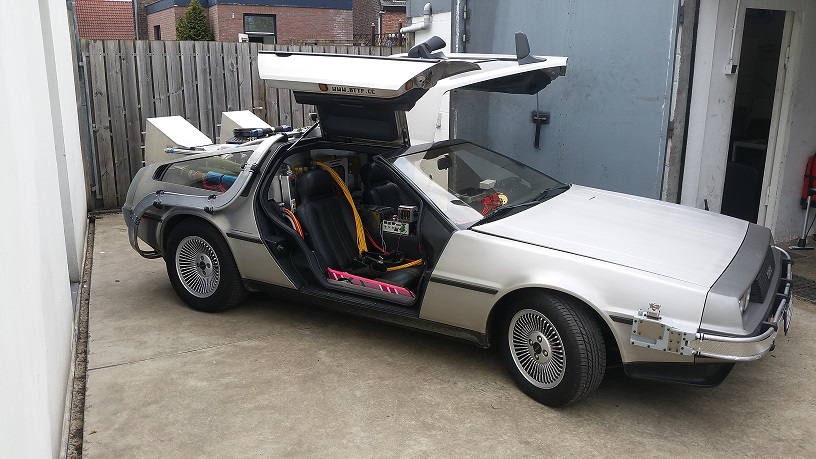 Back To The Future Full-scale RC controlled DeLorean

Bjorn Harms is creating a RC controlled DeLorean, on a REAL DeLorean. This project will be finished in June 2017.

1. Why and how did you have the idea to convert Full Scale cars to Full Scale remote-controlled cars?

I got the idea when I was 8 years old and watched the movie Back to the future 1. Just watching Doc controlling the DeLorean with a remote control always was a dream project for me. But it took me a long time before I was confidend and skilled enough to pull if off.

Over the years I have watched many youtube clips of people converting full size cars to remote control, so it was not very special any more. 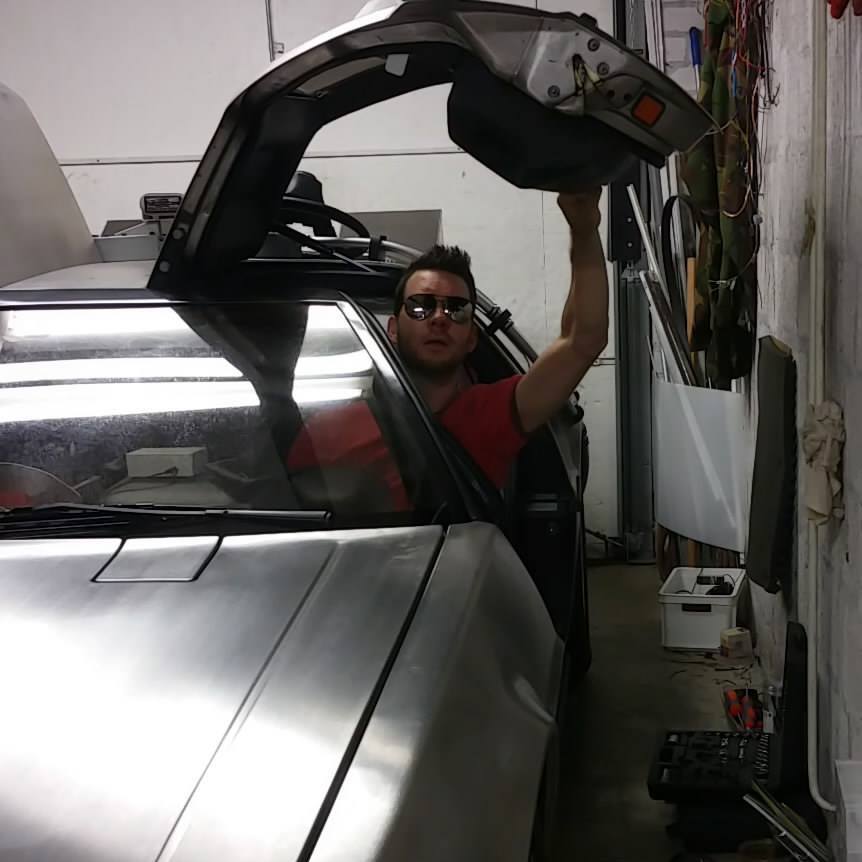 But all projects had very large motors and actuators insight. I wanted to take the RC converting to the next level, and build all the controls out of sight.

So the interior looked completely stock and the car could still be used for daily use.

2. After making several remote-controlled cars, you are working on the DeLorean of Back to the Future, was that your first idea? 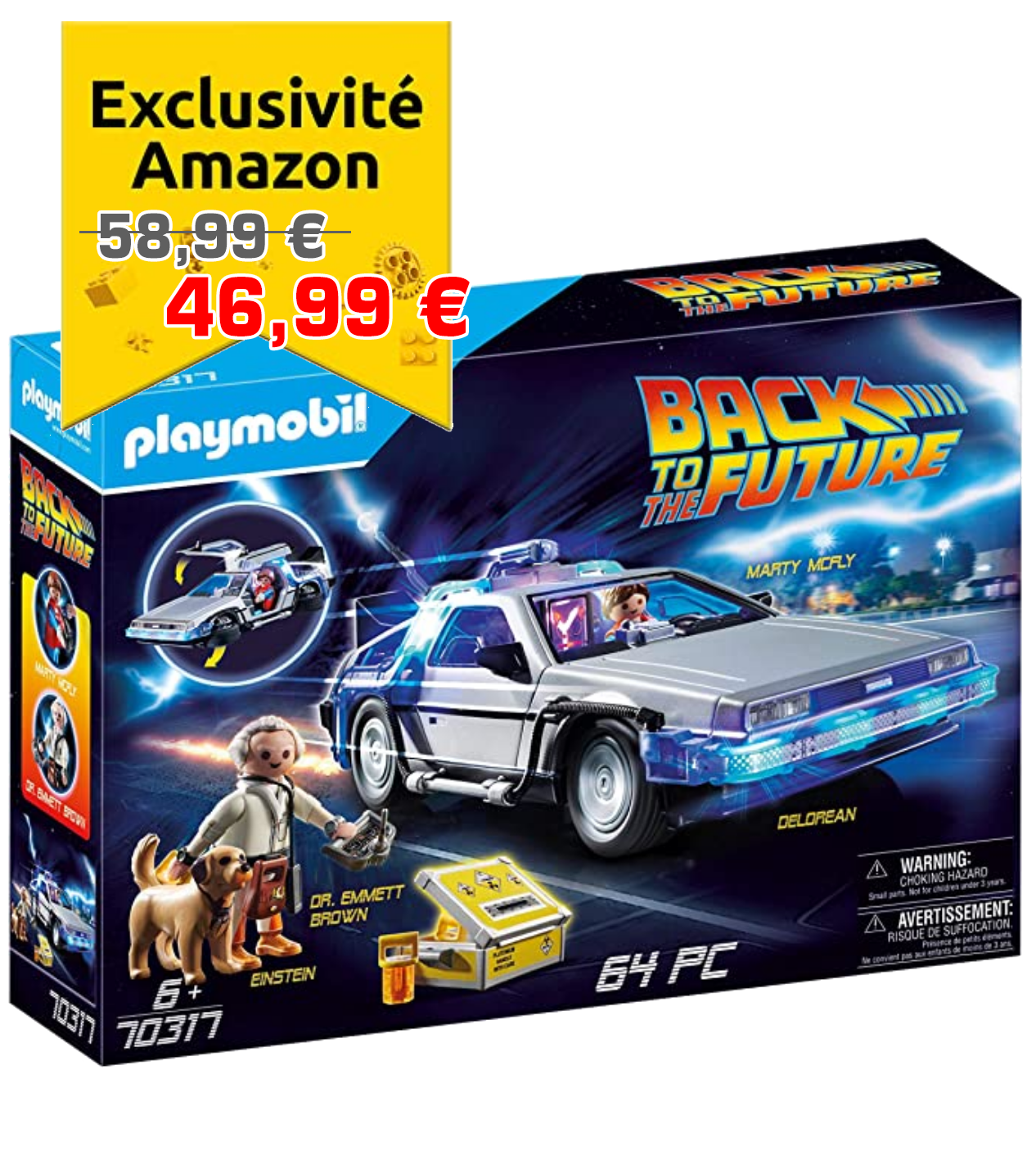 No. My first idea was to make a remote controlled KITT replica. I have owned 2 replicas, but I didnt had the RC knowledgde back then.

Once I figured out how to do it, I didnt had any KITT replica anymore, so I used my daily car: A Corvette c6. This was pretty scary, because I have never owned a toy RC car. Now I converted a 30.000 euros car with 404 horsepower. 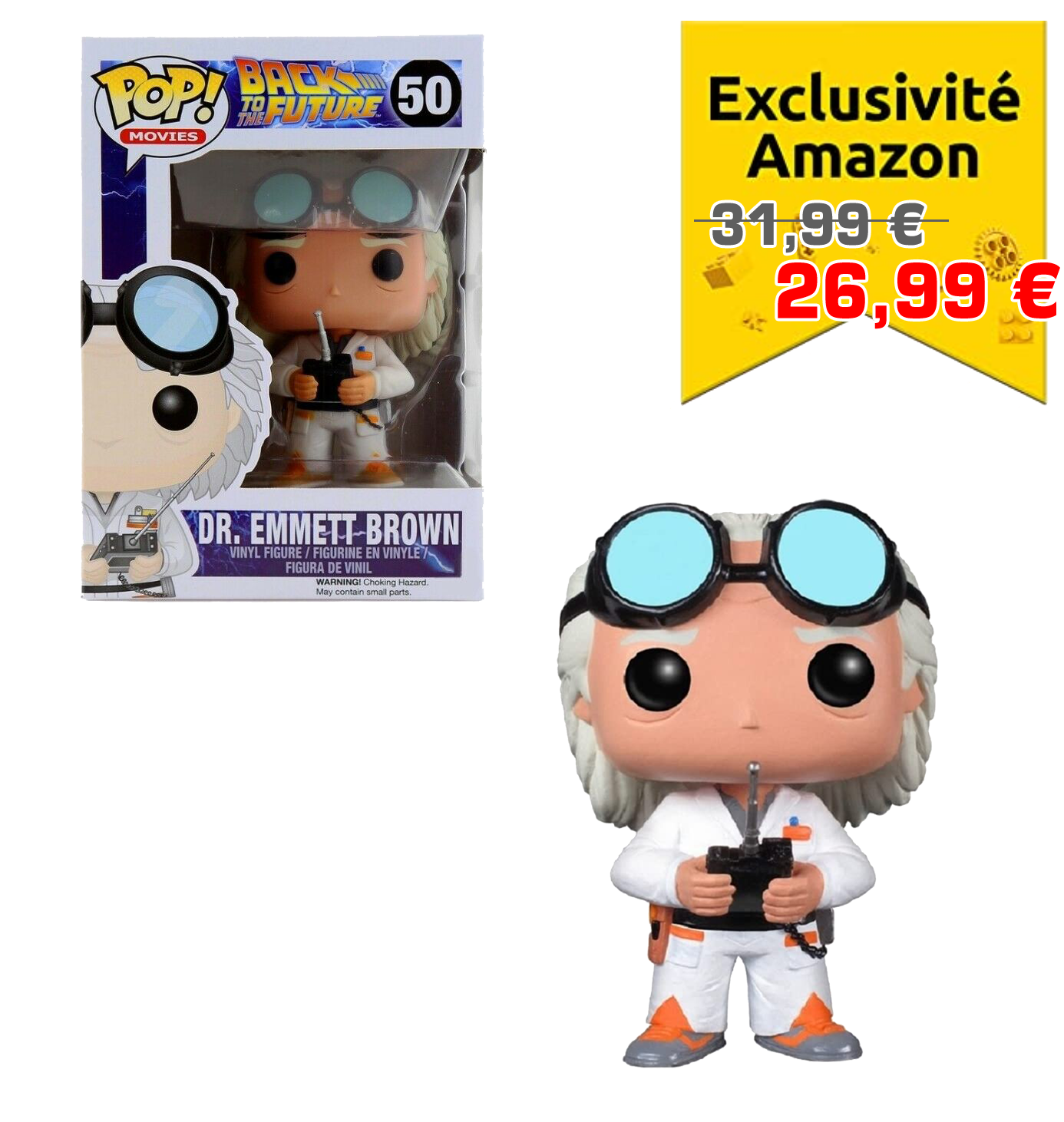 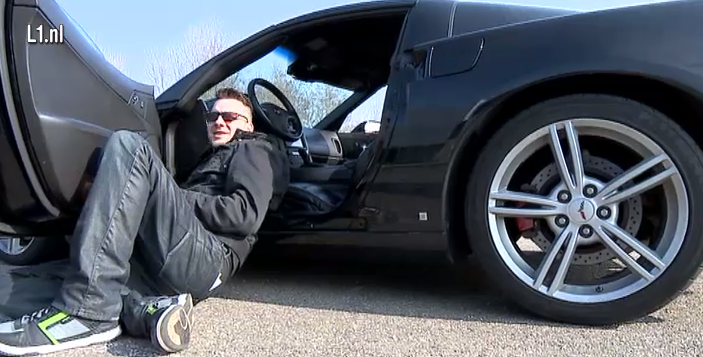 3. Is it just for fun, or a special demand from a owner? 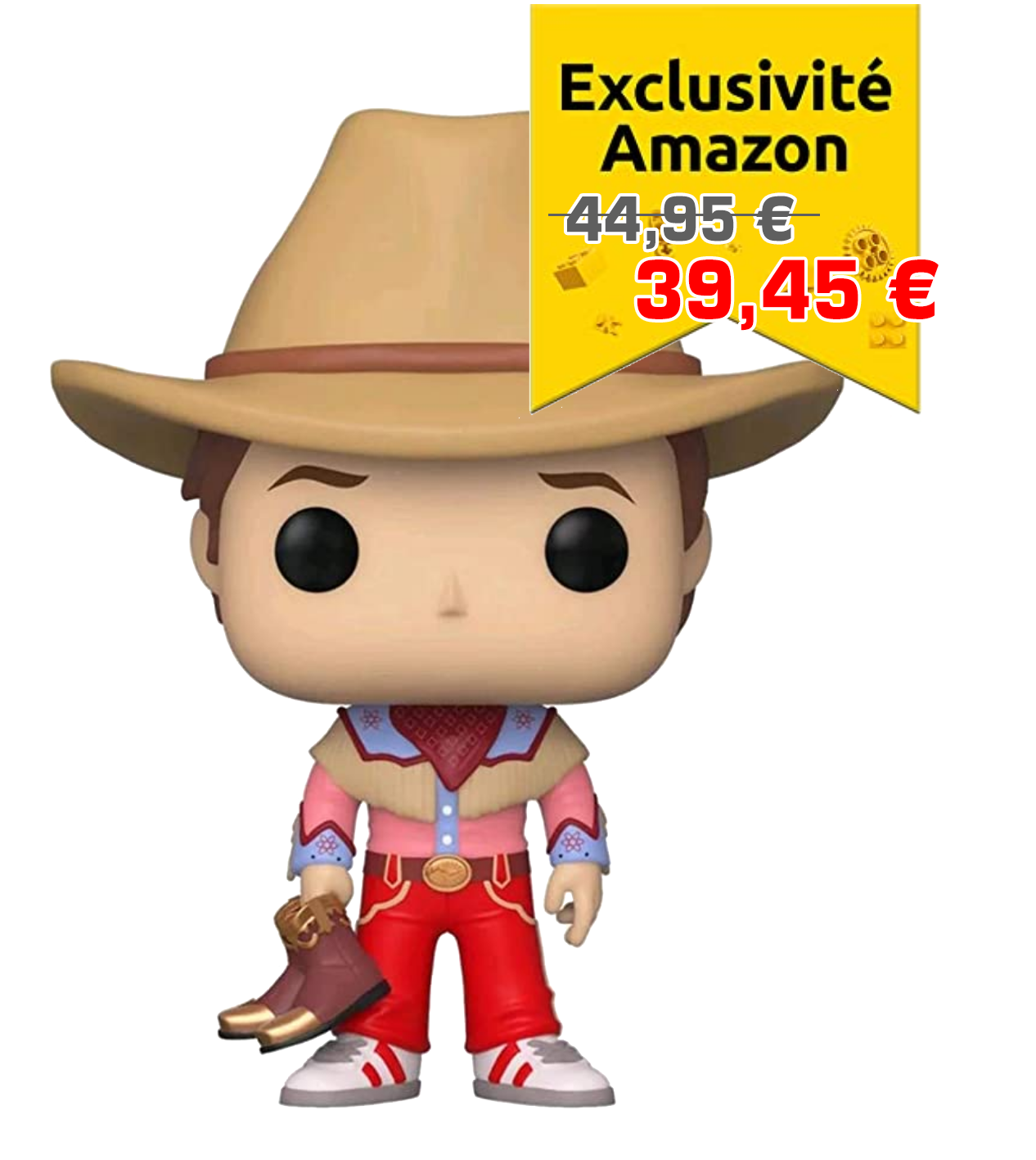 The DeLorean owner contacted me after seeing my other RC projects with the question: Could it be possible to convert a DeLorean? Since my idea started by watching Back to the future 1, and the DeLorean is also a childsdream of mine….OF COURSE I just had to try it. To make the project even more epic, I decided to even make his Futuba controller functional, so it works with the car. It was not easy! But I was sure that it could be done.

But, the projects started just for fun and to challenge myself. 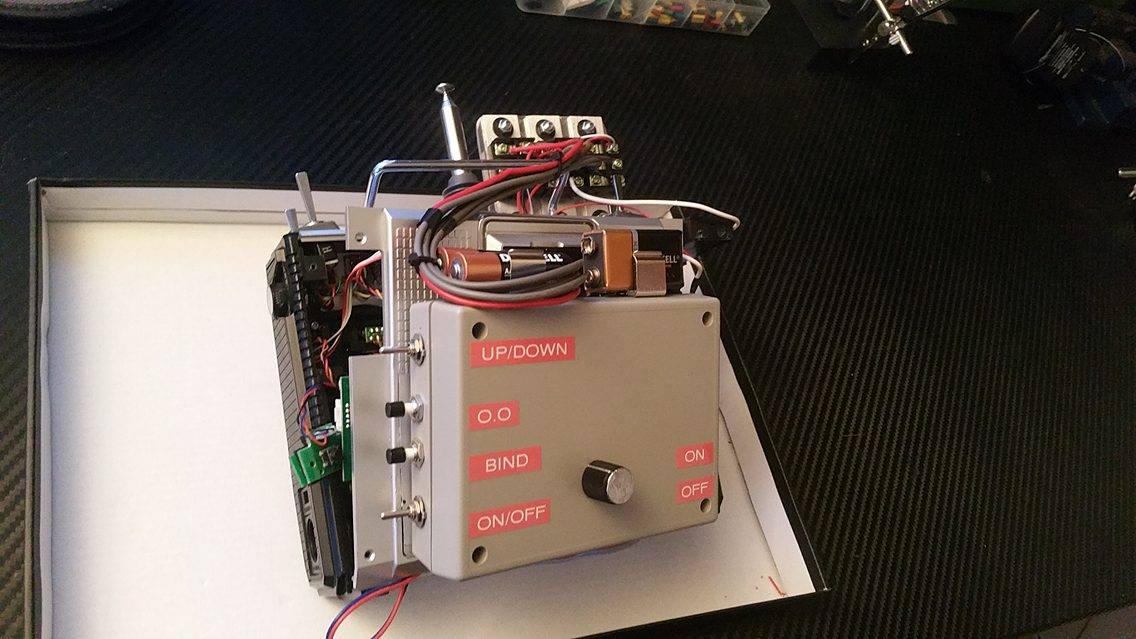 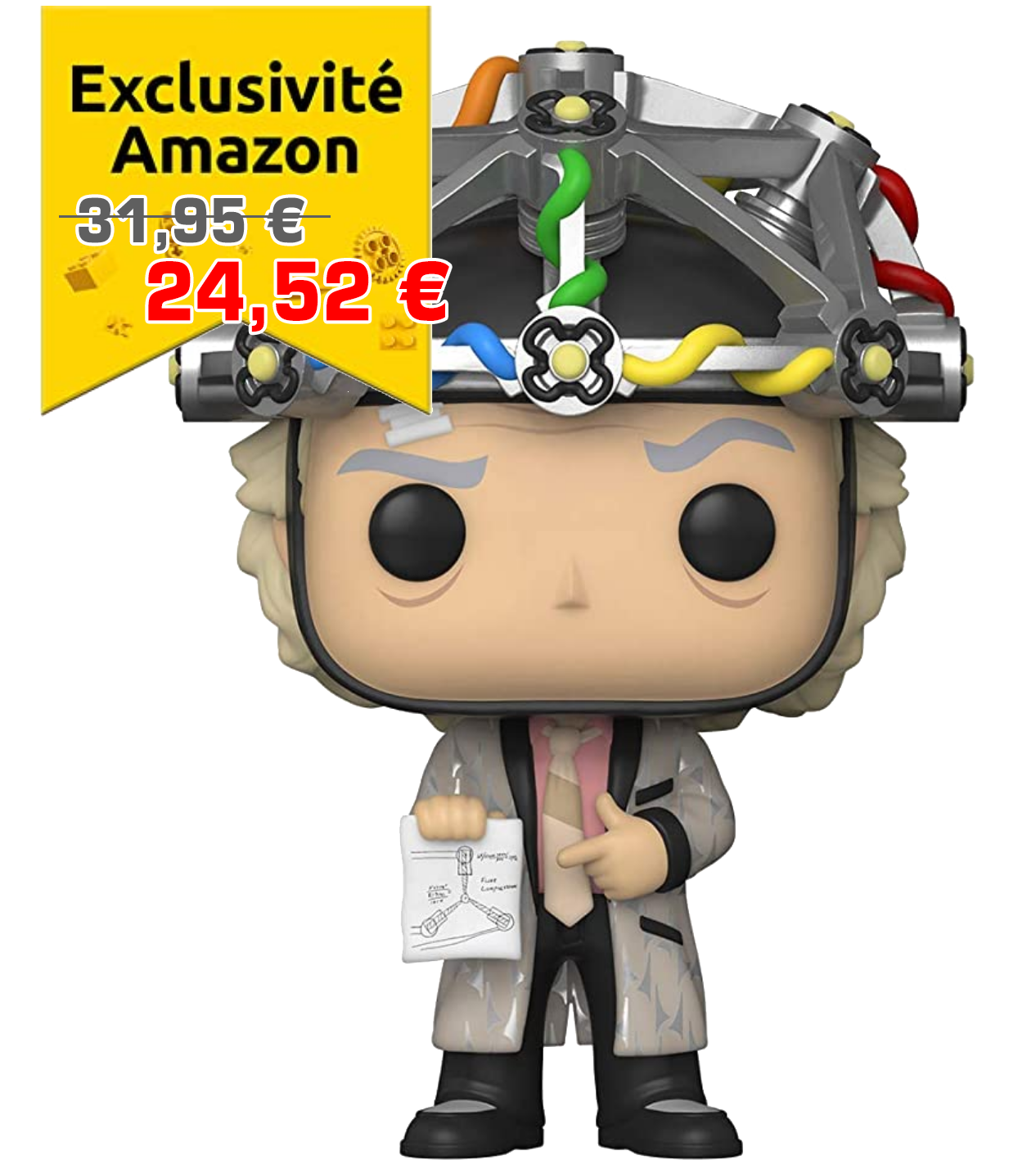 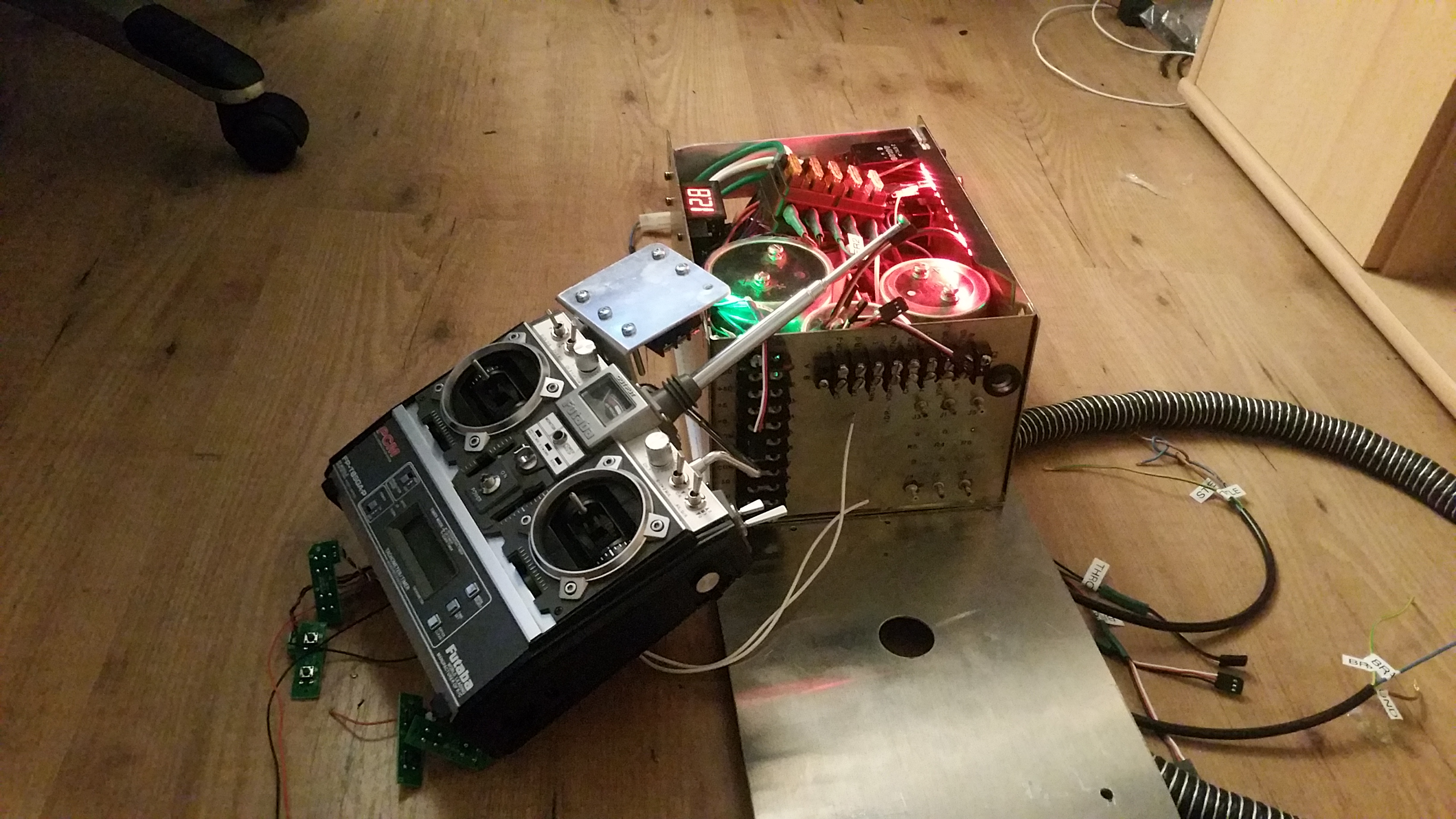 4. Will there be live demonstrations in public?

I dont know, but I think that the owner will do public demonstrations once everything is tested and the owner feels comfortable controlling his car with the Futuba controller. My ‘test’ demonstrations will not be public for safety reasons. But of course i will film and upload the clips on youtube. 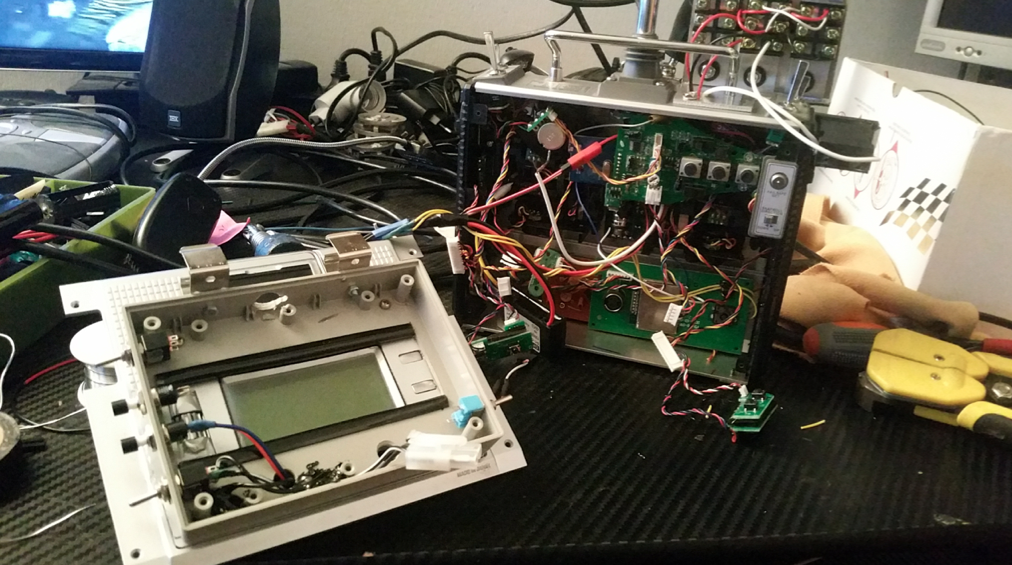 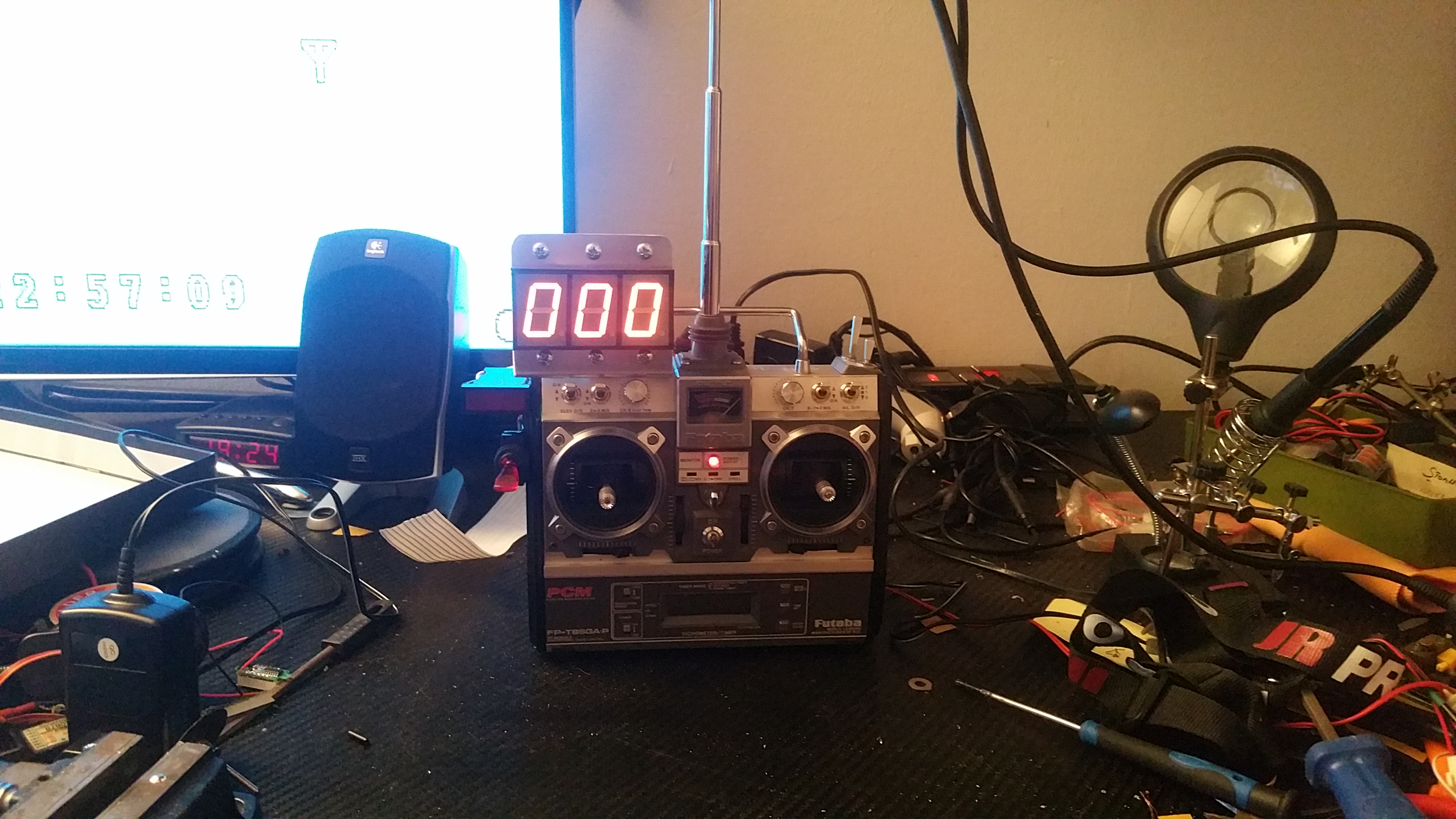 5. How long did it take to you for the other cars? And how many hours will you spent on the Delorean to complete it fully?

Designing the remote control system took me 1 year.  After that I started converting my own 2006 corvette. It took me 3 months to build the prototype system, and 3 more months to make the prototype safer and better controlable.

The RC set for the KITT replica took me around 4 months. And the DeLorean will be around 6 months when its fully ready. The biggest challenge was the steering system. Because the delorean doesnt have powersteering, I had to convert the powersteering of a Opel Corsa B, and build it in the DeLorean. This was very frustrating! A lot of customizing was needed to make it look stock. 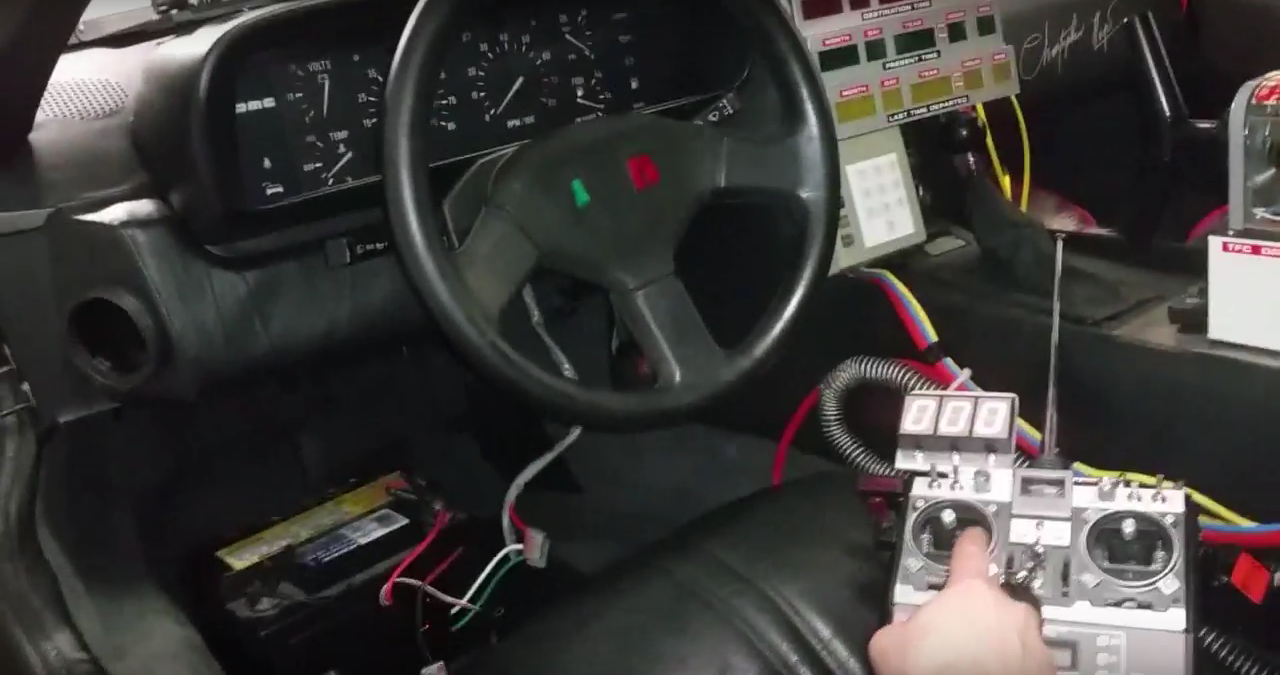 6. Do you plan to convert other DeLoreans if you are asked to?

Sure!, DeLorean owners can contact me for info, if they are interested in converting their DeLorean with the RC system. The car must be in good driving condition so it is safe to use.

It must me a automatic transmission and the steeringcolumn must be converted to powersteering. 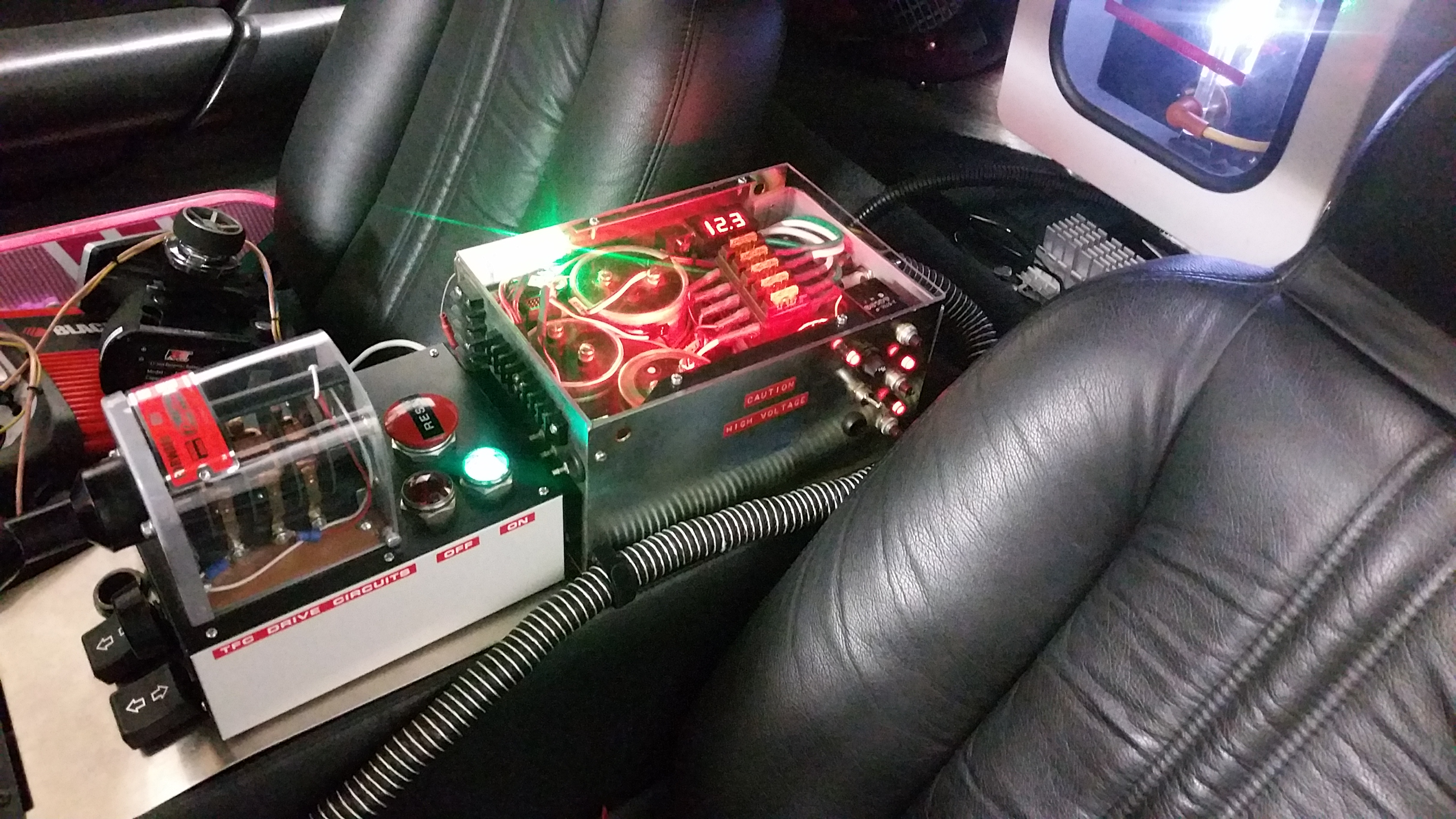 Here’s a video on his RC controlled DeLorean project :


You can follow Bjorn on his youtube channel, to take a look regularly on the progress of his project : 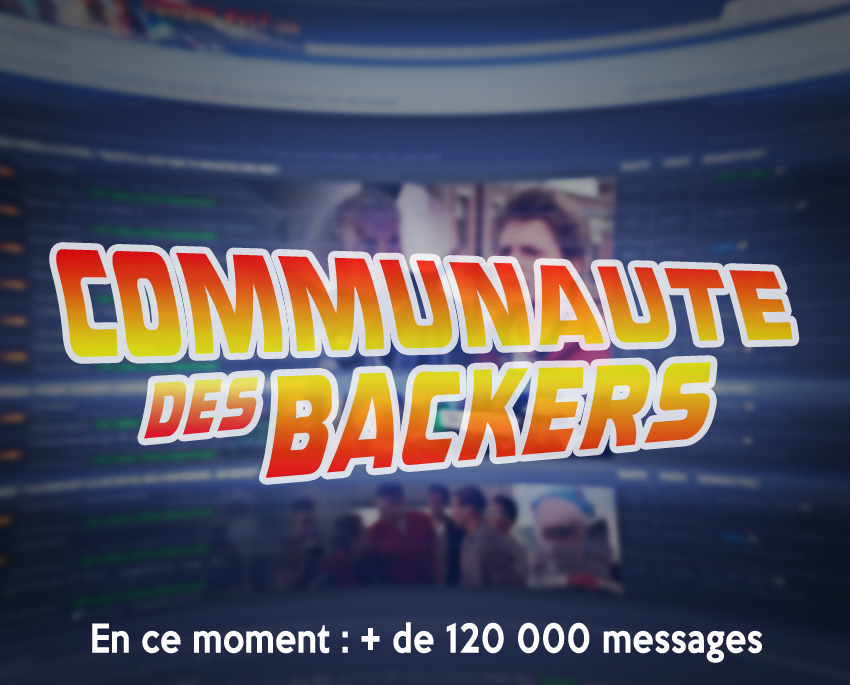 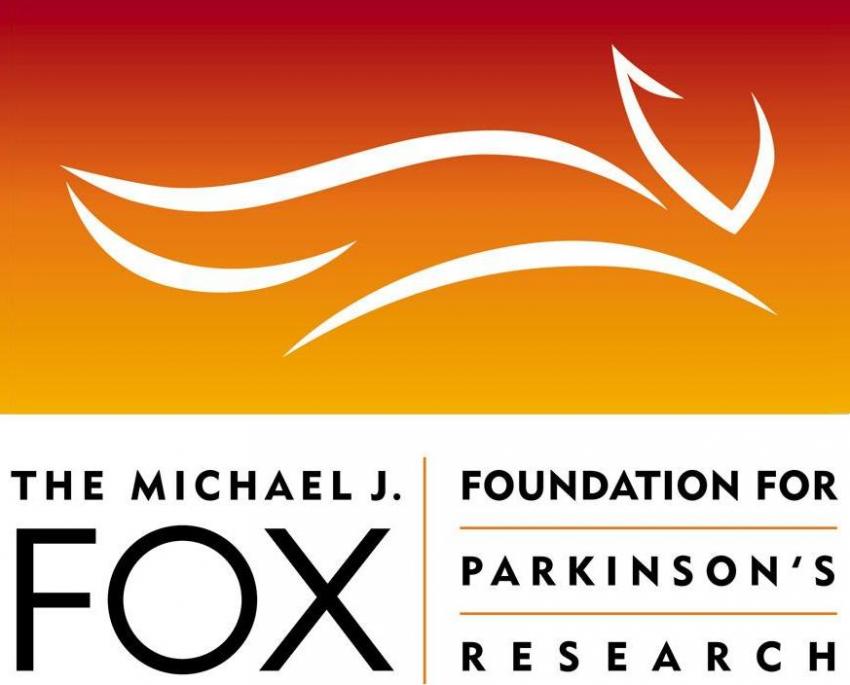